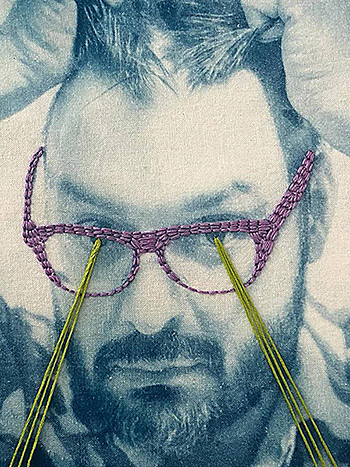 Ignatius Bug is a 40-something mad scientist and film photographer from Sacramento, California. He became obsessed with film photography in 2001 and is currently finishing his photography degree at Cosumnes River College, a Sacramento-area community college with a world-class photography program. He shoots with a variety of inexpensive cameras mostly sourced from thrift stores and prints in an ice-fishing tent in his garage using an enlarger he found on the side of the road. Ignatius Bug is on Instagram as @ignatiusbug.

1.  What inspires you about the nude female figure?

As a heterosexual male, it would be disingenuous of me to say anything other than that I find women compelling, fascinating, mysterious, a touch intimidating, and, of course, extraordinarily beautiful. Nude women have been celebrated in art since the stone age, and I’m just another celebrant of an ancient artistic tradition.

I take very seriously my work with models. It’s a lot of fun to collaborate with them on a shoot’s look, theme, and location. They’re my creative partners throughout the process, from concept brainstorming to final image editing and presentation. At the same time, I feel a lot of pressure during a shoot: By agreeing to pose nude for me, a model is placing a lot of trust in me as a photographer and creative partner. It’s my responsibility to justify that trust by producing the most visually compelling and emotionally rich imagery that I’m capable of. I loathe cliché, and really hate nude photography that dehumanizes models by treating them like pretty mannequins or anatomy specimens. It’s not all serious, though: My favorite shoots have been filled with laughter, silliness, and spontaneity. Best of all, when everything clicks, I get to create art that celebrates a woman’s beauty, mystery, power, and sensuality.

2.  How do you feel about being censored continuously in social media?

Censorship is insulting to the models with whom I collaborate, and to me as a photographer. It implies prurience and shame. The fact that social media applies a sexual double-standard to women is especially infuriating; male nipples are perfectly acceptable to show, but female nipples are taboo. I believe that the Silicon Valley geniuses could engineer a technical solution that would keep folks who don’t want to see nude art separated from that art, but instead they cave to advertising pressures and puritanical impulses. This has resulted in chilled artistic expression and the jeopardized livelihood of nude models through selective enforcement of content guidelines. Put differently, I find it quite problematic that Instagram, a $100 billion dollar company, essentially relies on pearl-clutching users (and trolls) to arbitrarily enforce censorship site-wide instead of designing a more equitable system that would allow artists and models to express themselves, while still protecting people who would prefer not to see nude art. That said, I feel forced to use Instagram because that’s where my audience is. There are better content-sharing platforms out there, but they don’t generate anywhere near the traffic that Instagram does.

3.  What got you into alternative processes?

A few years ago, I went all-out on a shoot: I put a lot of effort and money into booking an experienced model and traveling for hours to reach a carefully chosen, jaw-droppingly beautiful location. Unfortunately, but for a single exception, the shots from that day were unremarkable. They were technically sound but felt flat and uninspired. The one frame from that shoot that worked was an accidental double-exposure. Call it kismet or serendipity, but that one accidental double-exposure felt magic, chaotic, and alive. Since then, I’ve tried to intentionally add elements of chaos and imperfection to my photography by incorporating intentional light leaks, double-exposures, and deviations from standard film development into my creative process. Giving up the pursuit of technical perfection has been very liberating! I take more risks with my photography, and my art has improved as a result.

4.  Why have you decided on film as your medium?

I started shooting seriously back in 2001. When I started in photography, I desperately wanted (but could not afford) a digital camera. I could afford a nice 35mm film camera, however, so that's what I shot. Taking sterile, technically perfect pictures with a digital wünderkamera is easy. Film makes you work for it. Developing film is a messy, wet, time-consuming alchemy that is integral to my creative process. I love the thrill I get when peeking at my wet negatives straight out the wash -- the delayed gratification and built-up anticipation for getting that first look is sweet indeed. Finally, and maybe most importantly, I just think that people look better on film shot through old lenses than they do on digital shot through modern, harshly sharp lenses.